Mount St. Mary’s Seminary & School of Theology (MTSM) seminarian Darren Balkey took the Oath of Office and received his commission to the United States Navy on campus last week. He is now a Chaplain Candidate Program Officer with the rank of Ensign (ENS).

ENS Balkey knew from a young age that he wanted to devote his life to Christ. His path to military service was similar. ENS Balkey’s interest in becoming a chaplain was something he shared with his vocations director prior to entering the seminary. After high school, he attended Belmont Abbey College in North Carolina, before completing pre-theology studies at the Pontifical College Josephinum. He is currently enrolled as a third-year seminarian at MTSM.

As a Chaplain Candidate Program Officer, ENS Balkey remains sponsored by the Diocese of Charlotte to continue his preparation for priesthood and is also co-sponsored as a seminarian of the Archdiocese for the Military Services, USA.

“I’m excited and nervous about the thought of becoming a chaplain because I’ll be providing spiritual strength and moral counsel in some of the most difficult situations by offering the most important healing remedies – the sacraments,” explained ENS Balkey. “I’ll be helping to bring Christ to men and women dealing with a variety of issues from combat trauma and family issues to the stress of deployment and Post-Traumatic Stress Disorder.”

The next step for ENS Balkey is to complete a five-week officer training session which he hopes to do next summer. He will continue pursuit of his Master of Divinity degree at MTSM in preparation for his presbyteral ordination in 2022. After ordination, he will be assigned to priestly ministry for three years in the Diocese of Charlotte.

Following his initial ministry in the Diocese of Charlotte, he will be eligible for active-duty service as a U.S. Navy Chaplain. At that point, he could be assigned to a Navy, Marine Corps or Coast Guard unit, shepherding service members and their families.

The Archdiocese for the Military Services, USA
The Archdiocese for the Military Services, USA (AMS) is entrusted with the pastoral care of 1.8 million Catholics in the U.S. and around the world. The AMS is the sole endorsing agent recognized under U.S. law and the Department of Defense to endorse Catholic priests to minister in the U.S. Armed Forces and Department of Veterans Affairs. In addition to receiving the AMS endorsement, priests must meet all the military requirements to be commissioned as officers.

Navy Chaplains
Navy chaplains serve the Navy, the Marine Corps, the Coast Guard and the Merchant Marines. The Navy requests 250 Catholic Chaplains based on the number of active-duty men and women and their families in all of these branches combined; however, there are currently fewer than 50 Catholic priests available as active-duty Navy chaplains.

MTSM is the Archdiocese of Cincinnati’s graduate-level Catholic Seminary and School of Theology with nearly 200 full and part-time students. Founded in 1829, our 75-acre campus provides preparation for ordination to the priesthood and permanent diaconate as part of Mount St. Mary’s Seminary. In addition, our School of Theology offers classes for graduate and certificate programs for laity, clergy and religious. 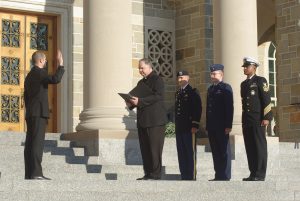