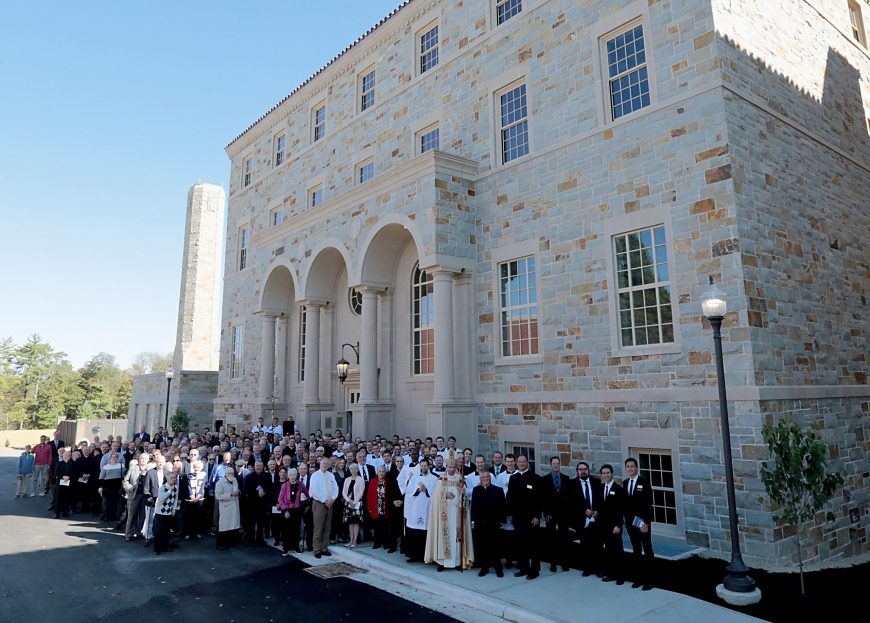 Bishop Schnurr blessed and dedicated the solution, the new Fenwick Hall, on Oct. 13. The $12 million building project adds 30 individual residential suites and two additional meeting and classrooms to the Athenaeum’s campus. This is the first new building at the seminary since 1959. Owing to demand, the seminary is one of the very few in the country building residence halls.

Fenwick Hall is named for the first Bishop of Cincinnati and calls to mind the first building constructed on Mt. Washington campus in 1890, also called Fenwick Hall.

Two years after breaking ground, the sounds of day-to-day priestly formation – studies, fellowship and prayer – have replaced the clamor of heavy equipment and construction.

“This is truly a monumental project in the history of the seminary,” said Father Brausch. “We’re excited to see what the Lord does with this.”

The new building was certainly a practical necessity, but aesthetic sensibilities were thoughtfully and properly considered, as well. The facade of the new structure blends easily with the existing architecture of the Athenaeum’s main building. The Northern Italianate Lombardy style is respected and integrated into the new construction both in materials and design. It provides a symmetry to the overall layout of the facility that wasn’t there before. It is a completion.

Every seminarian has his own living space with room still for those to come. The guest quarters have returned to their former roles, waiting to receive visiting bishops, priests and others, and the additional meeting and classrooms are poised for new programs and opportunities in the continuing formation of men and women to faithfully follow Christ. Knowing that God creates with purpose, we share in Father Brausch’s excitement for the future, because amazing things happen when those called by God respond with a generous “yes!”

At the blessing and dedication of the new building on Oct.13, Archbishop Schnurr referenced the archdiocesan prayer for vocations in his remarks: “Shortly after becoming the Archbishop of Cincinnati in 2009, I asked that my prayer for vocations be recited at every Mass. This year, I ordained nine new priests for the Archdiocese of Cincinnati, the largest class since 1977,” he said. “The number of seminarians at Mount St. Mary’s Seminary of the West has doubled from 2010 to 2017 and is expected to increase into the future. This is due in part to the generous response of many young men to the discernment of their vocational call. But also the increasing enrollment of Mount St. Mary’s Seminary reflects a growing awareness of the excellent formation that takes place here: academic, spiritual, human and pastoral.”

The archbishop continued, “To accommodate our recent and expected future growth, today we dedicate Fenwick Hall, the first new building on the seminary grounds since 1962. Approximately 18 months from conception to reality, Fenwick Hall was made possible because of the generosity of many people who gave their time, talent and resources. To the benefactors and friends of Mount St. Mary’s Seminary, I express my deepest gratitude. Because of your generosity, this seminary will be a blessing to the Church in this country for years to come.”

Added Father Brausch, “Throughout the process of planning and building Fenwick Hall, the first line of Psalm 127 has been our constant refrain: Unless the Lord builds the house, those who build it labor in vain. We pray and trust that we have not labored in vain, and we are confident that the treasure and effort that has gone into making Fenwick Hall a reality will be a blessing for the Church into the years ahead. And we are confident in this because we have not labored on our own. There are many people to thank for making this day possible. Thank you to our over 600 donors whose generosity and sacrifice will be visible here for generations to come.”