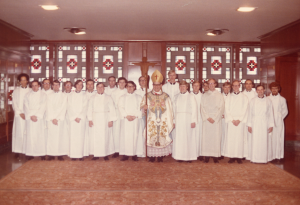 Fifty-eight men, who graduated from Mount St. Mary’s Seminary & School of Theology (MTSM), are celebrating milestone anniversaries of their ordinations to the priesthood this year.

Each year as the spring semester comes to a close, MTSM seminarians look forward to ordinations. This brings to mind all the men ordained before them. MTSM acknowledges the following men who continue to carry out their priestly ministry.

MTSM is the Archdiocese of Cincinnati’s graduate-level Catholic Seminary and School of Theology. Founded in 1829, our 75-acre campus prepares men for ordination to the priesthood and permanent diaconate as part of Mount St. Mary’s Seminary. In addition, our School of Theology offers classes for graduate and certification programs for laity, clergy and religious.