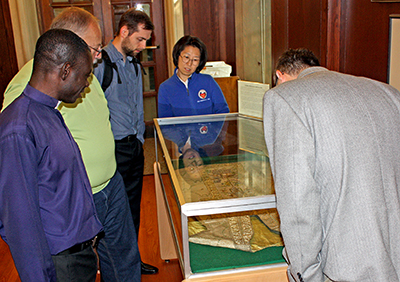 Bishop Fenwick’s Chasuble will be on display in the Athenaeum’s Maly Library through mid-November.

This chasuble belonged to Bishop Edward Dominic Fenwick, who served as the first Bishop of the Diocese of Cincinnati from 1822 until his death in 1832. He founded the seminary of the Athenaeum of Ohio – Mount St. Mary’s of the West, the oldest Catholic seminary west of the Appalachian Mountains, and initiated the publication of The Catholic Telegraph, the oldest continuously-published Catholic newspaper in the United States.

Bishop Fenwick’s chasuble was found in the Archives of the Archdiocese of Cincinnati in fair condition with stains, abrasion damage, brittleness along the fold lines, and loss of various decorative elements. Sarah Ater, archivist for the Archdiocese, initiated a two year project to restore the Fenwick chasuble. We are happy to display the recently completed work conducted by Chandra Obie Linn, Associate Textile Conservator at the Cincinnati Art Museum.

The Fenwick chasuble is made of silk brocade and embroidered with silk floss, metal thread, metal sequins, and stones set in metal mounts. The design includes images of flowers, butterflies, and goldfinches with a gold braid edging and wide gold ribbon framing the neckline and central panels. The panels are asymmetrical and not identical in design, suggesting they may have been salvaged from another decorative cloth. It is lined in yellow silk taffeta with an inscription in black ink near the neckline: “Rt. Rev. Bishop Fenwick of Cincinnati.”

Goldfinches were featured in the artwork of the late Middle Ages and the Renaissance, especially in images of the Madonna and holy child where the bird occupied a prominent location such as on Mary’s fingers or in Christ’s hand. The goldfinch is a symbol of redemption from the legend that when Christ was crucified, a goldfinch perched on his head and attempted to extract the thistle thorns from the crown. Moreover, thistle seeds are the staple food of the European goldfinch, and thistles were themselves regarded as curative (treatment for plague). Through its association with thistles, the goldfinch came to symbolize saving health and endurance, and in the case of paintings of the Madonna and child, this symbolism was transferred to the Christ child as an allegory of the salvation he would bring through his sacrifice.

The Chasuble is on loan from the Archdiocese of Cincinnati Archives and will be on display in the Athenaeum’s Maly Library through mid-November.

For visiting hours and more information about the Maly Library go to https://library.athenaeum.edu