Scroll to the bottom of the article to view the donation form. 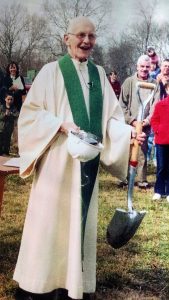 Fr. Giles Pater’s concern for the need for increased vocations to the priesthood inspired the creation of the Rev. Giles Pater Burse endowment fund to benefit MTSM seminarians.

Father Giles grew up in Cincinnati, attended Mount St. Mary’s Seminary (then in Norwood) and was ordained in 1958. He served in various capacities at the Seminary and within the Archdiocese, in many cases utilizing his education, talent and love for liturgical music. In 1971, he was appointed Vicar of the Commission on Worship for the Archdiocese.

In 1983, Fr. Giles was named pastor of St. Agnes Parish (presently Church of the Resurrection) in Bond Hill, where he developed lasting friendships and fond memories. In 1995, he became pastor of St. John Fisher in Newtown which was quickly outgrowing its worship space. Parishioners were eager for expansion. After many discussions and careful study, he announced from the pulpit, “It is time.” Although he was reaching retirement age, he privately confided he would “not retire until the new church is built.” He gathered and inspired a team of parishioners and consultants which led to the opening of the current gathering and worship space in December, 2005.

After his retirement seven months later, he continued his ministry, including regularly celebrating Mass at nearby parishes. Partnering with other local religious, he frequently visited inmates at a local correctional institution. He also enjoyed traveling and the company of his family and former parishioners. Fr. Giles died peacefully on November 3, 2017. He left a legacy of service to others and dedication to Christ and His Church.

If you are interested in learning more about this endowment please contact Dr. Lori Rassati, Vice President of Development & Relations at 513.231.6161 or lrassati@athenaeum.edu.