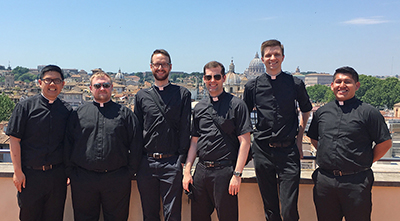 This summer, six seminarians from Mount St. Mary’s Seminary of the West, have embarked on a journey known as The Rome Experience. This program offers diocesan seminarians an opportunity to pray and to learn at some of the holy and historically significant sites of Christianity, including the Shrine of St. John Vianney in Ars, France; the major basilicas of Rome; the catacombs, and more. The Rome Experience encourages seminarians to prayerfully discover the hand of God in His Church and to receive a stimulus for their spiritual lives and ongoing formation.

The following is a reflection written by seminarian Stephen Hughes, Archdiocese of Cincinnati.

“For my second week of the Rome Experience, my fellow seminarians and I were partaking in a retreat at the John Paul II Seminary outside the city of Ars, France. Overall this made up the majority of the week, and personally the most profound. A silent retreat combined with spiritual direction and the Sacrament of Reconciliation is a powerful experience and a much needed one. It is easy to become complacent in the spiritual life with the busyness of life, even in the seminary. Taking time to quiet the mind and spirit and listen to God reveals many things that are beneficial to growing in holiness. I certainly came out refreshed and unburdened from faults and concerns that I both knew and didn’t, or at least hadn’t recognized. I also learned many tools for the spiritual life that I plan to include in my own plan for growth.

The great blessing of having the retreat at Ars was the opportunity to visit the great Saint John Vianney. A quick walk into town leads to the basilica prominently in the center of town. Inside I had the chance to pray at his resting place at one of the the side altars. Later in the week, after the retreat, we also had the opportunity to have Mass at his tomb. As a man who is aspiring to the priesthood it is a great blessing to be able to see the patron saint of priests in person. He serves as the epitome of what a parish priest is meant to be, surely during a time of prayer and reflection he would intercede for us to God to help us to live up to the example he set.

Since we were staying at a seminary we also met out fellow brother seminarians from other countries. One of them was Oliver from Quebec who generously showed some of us around his home and answered some of our questions about the seminary and life in France. The seminary itself is split between the John Paul II center outside of Ars where we stayed and additional housing and classrooms in Ars. While we were there I got used to eating plenty of bread with jam at breakfast, and at every meal. Meals started with bread, a salad or some sort of vegetable followed by the main dish. What was most interesting was the last dish was yogurt served with cheese, such as brie and gouda. It was actually quite good!

Once the retreat was finished we had a couple of free days before we could go to Rome, so we took a trip to the city of Annecy near the border with Switzerland, about an hour from Geneva. It was there that Saint Francis de Sales lived as bishop of Geneva and is buried. Not only is he known as a great spiritual writer but he is also a patron of the Archdiocese of Cincinnati. The other Cincinnati seminarians and I took the opportunity to pray before his relics and ask for his blessing on us and on our diocese. The city itself is very beautiful with canals that run through it much like Venice, however the water is very clear, perhaps because it comes from the run off from the Alps nearby. We toured the city and ate at a local restaurant where we had some of the local dishes from the region known as Savoy.

A part of the Rome Experience is formation and education. While the majority takes place in Rome we did receive a primer in Human Virtues as they are developed by the Church and written by saints like St Thomas Aquinas. Understanding morality and virtues are critical for a priest since they are what most apply to instructing the laity and in preaching homilies. Good pastors of souls need to be able to help their parishioners to grow in holiness and deal with the sufferings in life. I am looking forward to a much more extensive education once we arrive in Rome. We left on the last day of the week and have the weekend to explore Rome before starting on Monday. I look forward to the blessings that await in the center of Christendom and further moments of growth as a man pursuing God.”

You can follow the men on the 2019 Rome Experience at http://theromeexperience.org/blog/